Back to
Site Map


We have a lot of foxes, so we have tried different methods of control. First we borrowed a pair of alpacas as guards and then we bought Hector Protector, a wethered male alpaca. We came to the conclusion that one alpaca works better than a pair - they spent all their time together. Hector isn't a pet, but he thinks he is management like us, and he likes to be treated with respect. With a fourteen year expected lifetime, he is definitely worth the money.
We don't think he is "bonded" to the sheep, though he is curious about the lambs. We know he hates small dogs and foxes. He will chase them to trample on them, but we have never found any dead. He nearly got our Jack Russell terrier, which ran very very fast! We keep Hector with the lambing ewes before they are due. We think that the foxes learn to stay away from the paddock he is in, not just that he chases foxes away after the lambs are born. We move the lambing ewes at night into a small paddock which he can easily watch. We have lost only one lamb to a fox in seven years, and that was when the sheep were in a long narrow paddock and a ewe with a day old lamb was camped at the far end from Hector. We've been told that one fox can distract the alpaca while others take lambs, but our local foxes seem to be solitary. 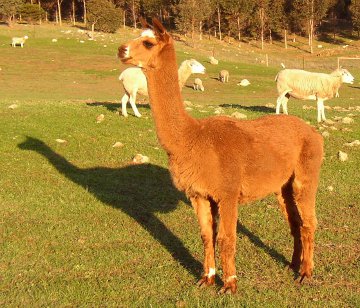 Hector Protector
We are lucky in being far enough from a town not to have packs of wandering dogs. We know that an alpaca would be no match for them. On the 'good dog' side, some farmers use Maremma dogs, which really do 'bond' to the sheep and will fight dogs. They need training and are more expensive to feed, but they have an excellent reputation as guardians.
We also bait for foxes with 1080. We follow the rules carefully. Each bait is buried so it can't be picked up by a bird, and we often put something on top to be even more attractive - fish guts are very effective. Baits are at least 500 metres apart to stop baits being collected and hoarded by a fox. A hoard of decayed baits can be found later by another fox, which may survive to be bait-shy.
We bought legal soft-jaw traps for foxes from the USA, but found them difficult to use. The trapping culture in Australia has virtually died out. However the instruction book from the USA taught us about fox movements and tracks, so we learned where to put baits rather than traps. Now we usually bait in only one or two key spots, on tracks or gateways or a hill 'saddle'. Last year we got 12 foxes in 13 nights, each with a single bait in the same key spot. We rarely find a dead fox, because the baits take about four hours to work and foxes travel a long way, but it's very satisfying when we do. A missing bait means a dead fox.
Our "hospital wards" (old chook sheds) are fox proof, which is important because Hector is somewhere else. We considered making a small fox-proof lambing paddock, but the fencing isn't easy and we decided that Hector protection worked well enough