Back to
Site Map 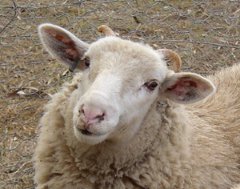 Fourth generation scurred lamb
To make it harder to reach a fully polled flock:
*
Your original ewes will keep lambing for several years. Your first and second generation ewes will also keep on breeding. Their lambs will include many new half-polls, which will in turn breed more half-polls.
*
Your ewe lambs will only breed in their first year if you can bring their weight up to about 40kg in six or seven months. Otherwise each generation will take two years, so 'three generations' may mean six years.
*
Some half-poll rams have scurs which are so short that you can mistake them for a ram with two poll genes. You may discover that you've made that mistake only when you have a lamb with true horns - it has inherited a horn gene from its sire as well as from its dam.
*
Some breeds have ewes which are 'hornless', even though they have two horn genes. In other horned breeds, although a pure-bred ewe will have two horn genes and will always have horns, a half-poll ewe will look the same as a polled ewe because the poll gene is dominant. In either case, these ewes will still have a horn gene which they can pass on to their lambs. You can't see if they have this horn gene, whether you are buying or breeding.
*
There are other important traits besides the poll gene, like shedding and meat characteristics. If you retain scurred or horned breeding stock for excellence in those other traits, it takes longer and longer to 'breed out the horn'.


But to make it easier:
*
A genetic test can now check whether sheep have horn genes. The 'HornPoll' is available already and costs about $100 per sheep, which makes it more affordable for small farmers with small numbers to test. A cheaper test may come soon.
*
After the second or third generation, you can speed things up by culling any ewes that have produced a scurred lamb - so long as you are sure that the sire has two poll genes, the lamb's horn gene must have come from its dam. Mothers of ewe lambs slip through the cull in breeds where only ram lambs will show scurs, but the cull still helps to reduce the incidence of the horn gene in the flock.